“Not On My Watch” Bullying Prevention After School Program 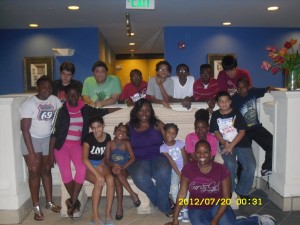 ViJIEN Youth Film Academy (VYFA), a production of ViJIEN Enterprises Corporation, is a special film camp, with a specific mission to provide kids the opportunity to experience the creative process of filmmaking.

“This camp is the best because it was fun. I learned that when you direct a movie, it’s not what you think about that matters. It’s that you do it and you are proud of it.” -Tiphanie Olowu, Age 8, VYFA Cadet (2012 & 2011)Cadets are instructed in the areas of film production, acting, and leadership development, to create an end product that will benefit them, the community, and the world. Past Themes: 2012 VYFA Camp Theme: “communication, laughter, and connection,” “The Difference a Male Role Model Makes in a Child’s Life,” and “Everything French.”VYFA is also very committed to community involvement and social responsibility.“Simply put, my idea is to nurture creativity, team building, and self-confidence in children by providing an outlet for them to be involved in their very own film production on a kid scale from scriptwriting, to directing, to casting, and more,” says, Tomeka C. Napper, Creator/Executive Program Director of ViJIEN Youth Film Academy.
VYFA was held this year at Piazza Di Giorgio Café (Galleria Mall) 2414 East Sunrise Blvd in Fort Lauderdale. Located near the Palm Court Entrance and the famous Truluck’s Seafood, Steak, and Crab House Restaurant.

“Many thanks, and congratulations on providing an excellent opportunity and program for children throughout South Florida.” Craig Hall, VP for Communications, New World Symphony

There are no upcoming events at this time.