(Miami, FL, July 8, 2014) – National Voices for Equality, Education and Enlightenment (NVEEE) will host its inaugural leadership conference for students ages 14-21 at Florida International University’s Honors College this summer from July 16-20th, 2014.  One hundred scholarships were co-sponsored by FIU’s Center for Leadership and Service, Kaufman, Rossin & Co., Wells Fargo, and a grant provided by the Be a STAR anti-bullying campaign (founded by WWE and The Creative Coalition) to help not only students who have been bullied, but also students who want to learn leadership and social skills and become empowered to be “upstanders” as NVEEE Peace Ambassadors. “We’re extremely proud to support NVEEE and their efforts to make our community a more positive place to live” said Yaury Jattin of Kaufman, Rossin & Co..   “Their mission is one we truly believe in.” Other sponsors include BJ’s Wholesale, Publix, Whole Foods, and numerous non-profit partners who are staples in this community. The goal of the conference is to serve as a catalyst to support peer-led intervention to alter school cultures around bullying.

At the core of the conference is the The Peace Ambassadors program which teaches students how to serve as upstanders, advocates and leaders in their schools and communities in order to prevent bullying, suicide and violence. Students who are designated as Ambassadors at the conference will participate in monthly trainings where they will help create bullying prevention training materials as well as learn to co-facilitate NVEEE’s signature “Not On My Watch” Bullying & Harassment Prevention Program.

“Studies have shown that youth are more likely to listen and respond to other youth in educational interventions, setting the stage for them to serve as role models. Education is an essential component of how NVEEE engages families and communities in moving towards social change” said Jowharah Sanders, Founder of NVEEE. “Our surveys from 2013-2014 school-year found that 42% of students who were currently or had been previously bullied reported that no one stood up for them. So it wasn’t a shock when only 26% of students surveyed at the beginning of our workshops reported that they would help a student being bullied. However, we are proud to report that after participating in a series of our signature “Be Upstanding” workshops, that number increased to an impressive 96%. This is why our work in the community is important. Our goal is to turn bystanders into upstanders and create a ripple effect.”

The inaugural conference at FIU’s Honors College is designed to empower students like Verona Rose who was bullied and decided to turned her pain into purpose.  As a Peace Ambassador for NVEEE, Verona has developed strong leadership skills and has shared her story during workshops of becoming an upstander vs. a bystander in the efforts to prevent bullying, suicide and violence in schools and communities.  “Being an upstander is much more than a phrase or action, it’s a way of living. You should not live in fear of being who you are” said Gabriella Garza, a student who participated in NVEEE’s workshops and immediately signed up to attend the conference and become an official Peace Ambassador. “This conference will show you to love not only yourself but others. It will help you gain the confidence to not only stand up for yourself and what you believe, but to stand up for those who do not have a voice.”

To learn more about the benefits and responsibilities of students in the program, please visit https://www.nveee.org/peace-ambassador-program/.For sponsorship opportunities for the conference or to make a  donation,  please email info@NVEEE.org or call 954.866.5880. Online donations are accepted on the website at www.NVEEE.org. 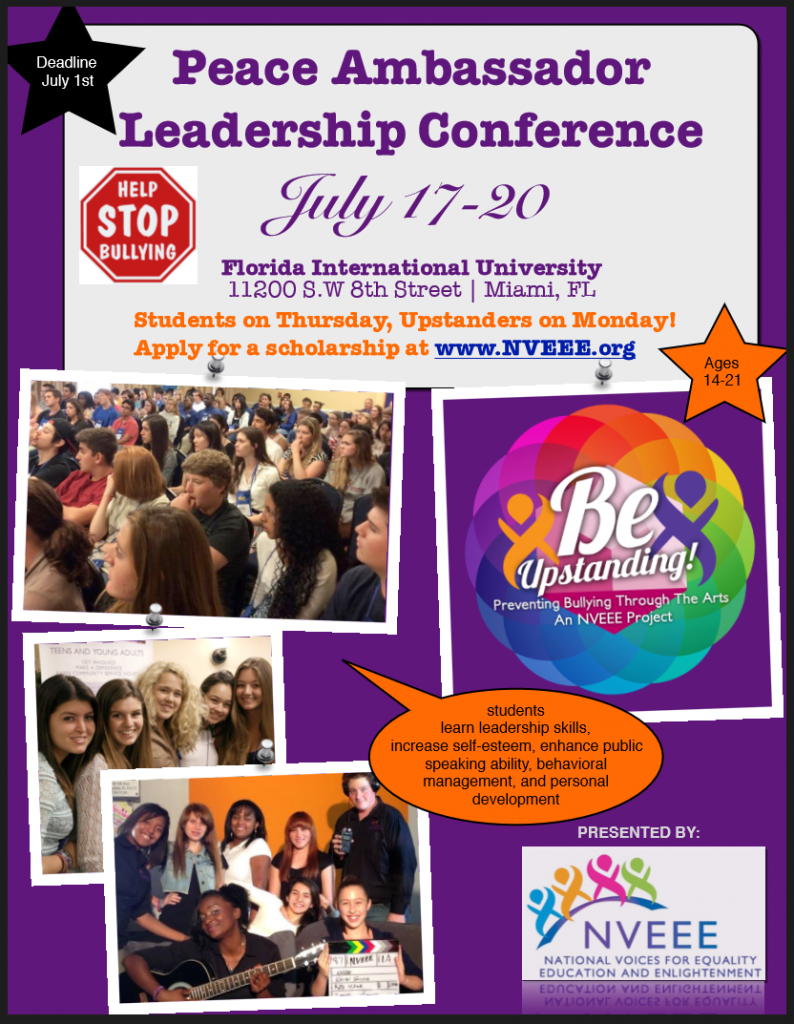